The chart below presents data on the average monthly asking rent as well as the average rent per square foot for GTA rental listings (all property types: basement apartments, rental apartments, condo apartments, townhouses and single-family homes) from January 2019 to January 2021. 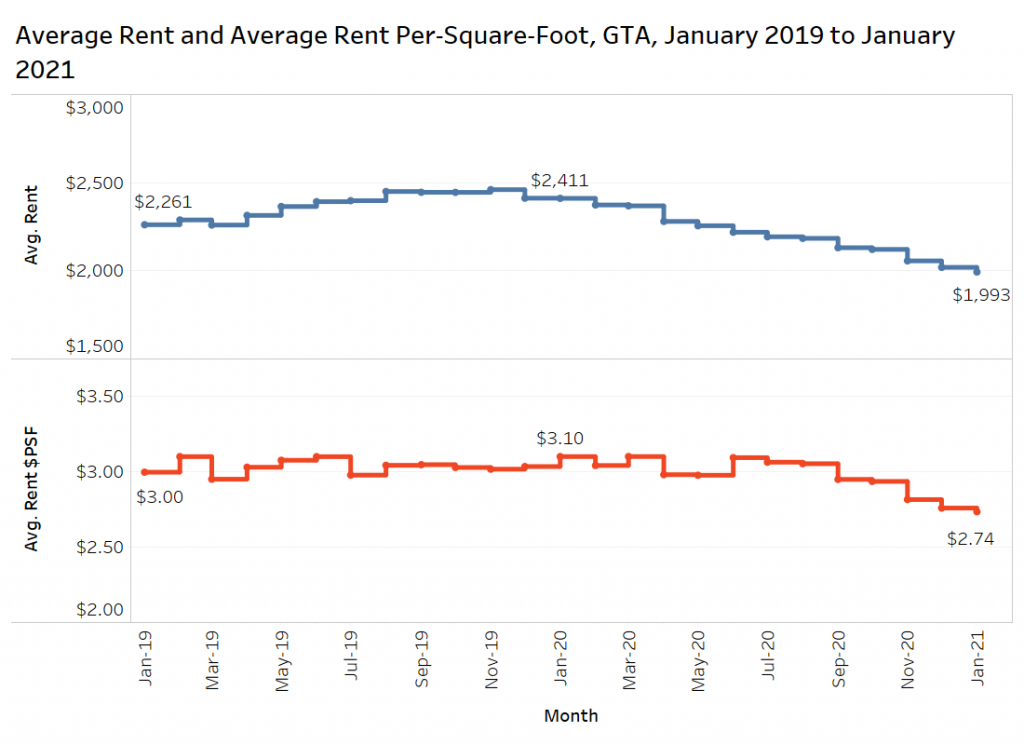 The next table looks at data on the average rent by bedroom type in the GTA for all property types in 2020 and 2021 by quarter. Five- and six-bedroom units have been removed from the chart, as the small sample sizes lead to monthly volatility.

Average Asking Rents for One Bedroom Units Down about 16% annually

Rents for all bedroom types except for four bedroom units have decreased in Q1-2021 versus Q1-2020. 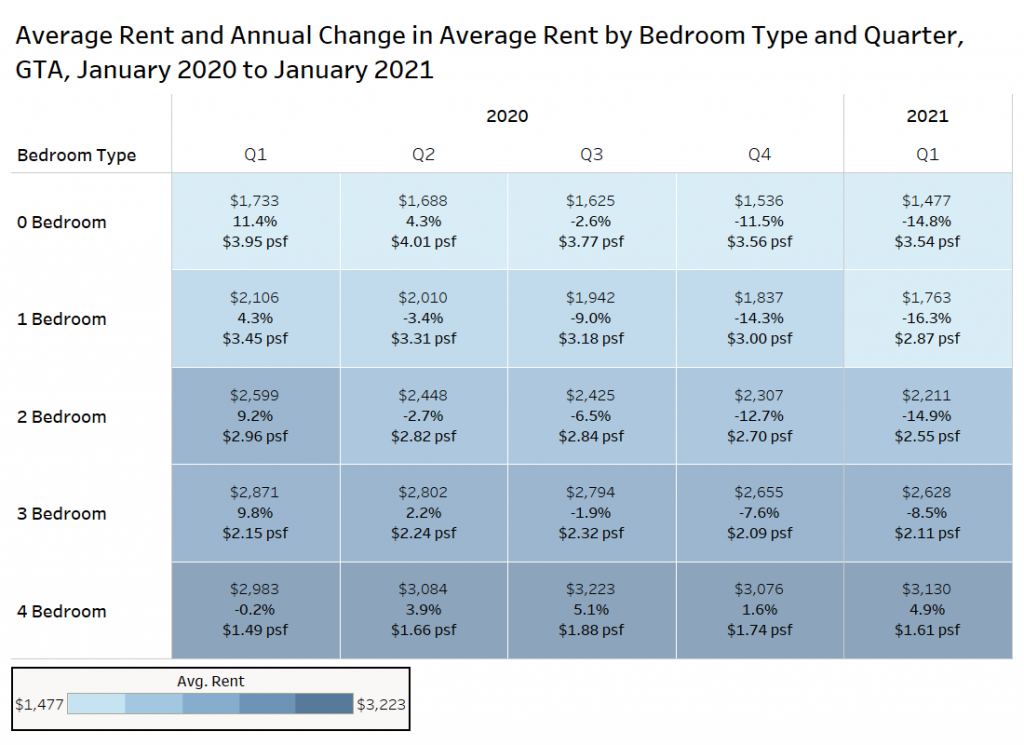 The average monthly rent for a studio apartment in Q1-2021 was $1,477. The rent per square foot has remained steady quarter-over-quarter, but has declined by over 15% compared to the previous year.

The largest decline was experienced in one-bedroom units, where the average monthly rent dipped by 16% annually to $1,763 per month. The average rent per square foot has steadily declined over the past year, and has decreased by 17% annually to $2.87 psf.

Four-bedroom units are the only bedroom type to experience an increase in average monthly rent year over year, moving up 5% to $3,130. The average rent per square foot for Q1-2021 has also increased compared to the previous year, moving up 8% to $1.61 psf. However, this measure can be volatile due to the very wide range of sizes for four-bedroom homes.

The data in the next chart shows the average rent and average rent per-square-foot for single-family homes, condominium apartments, and rental apartments by month in 2020 and 2021 via TorontoRentals.com listings data.

GTA Condo Rents are Down 19% Annually

The average monthly rent for single-family homes continued to decline in January 2021. The rent fell 16% compared to the January of last year to $2,403 per month. The average rent per-square-foot has stayed relatively unchanged compared to January 2021, moving from $1.92 psf to $1.94 psf. 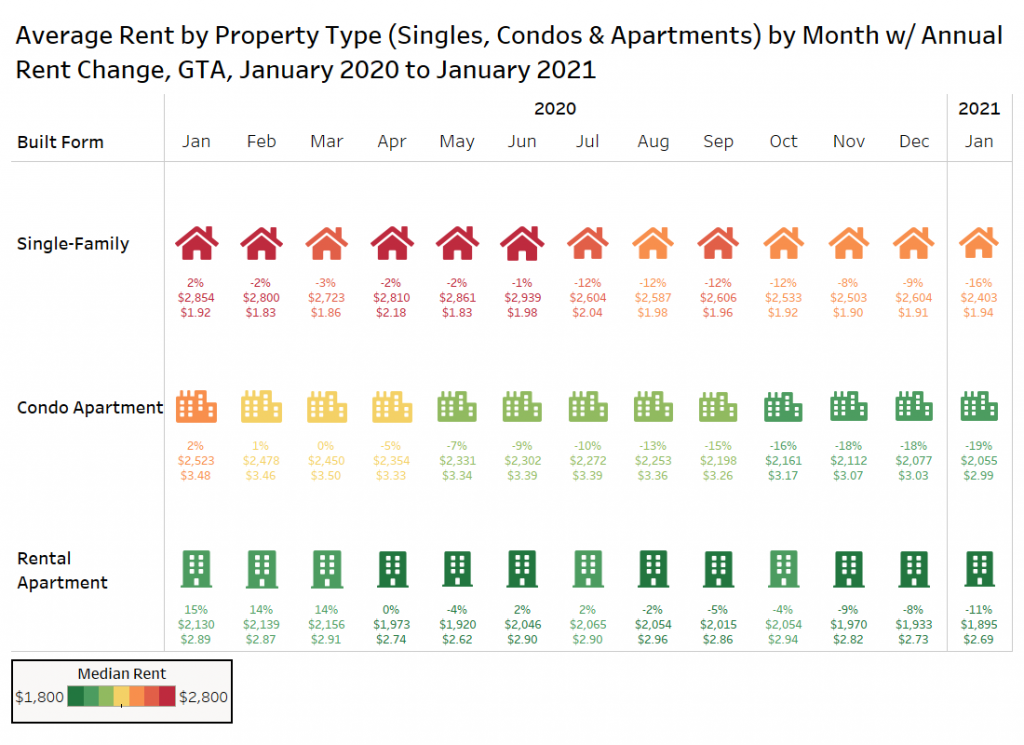 Condominium apartments fared even worse, with the average monthly rent declining 19% annually, down to $2,055 per month. The rent per square foot has also declined 14%, moving to $2.99 psf in January of this year from $3.48 psf in January 2020.

The chart below presents data on the average rent for condominium rentals and apartments in select GTA municipalities in January 2020 and January 2021 (Toronto is broken up into its former municipalities, prior to amalgamation). 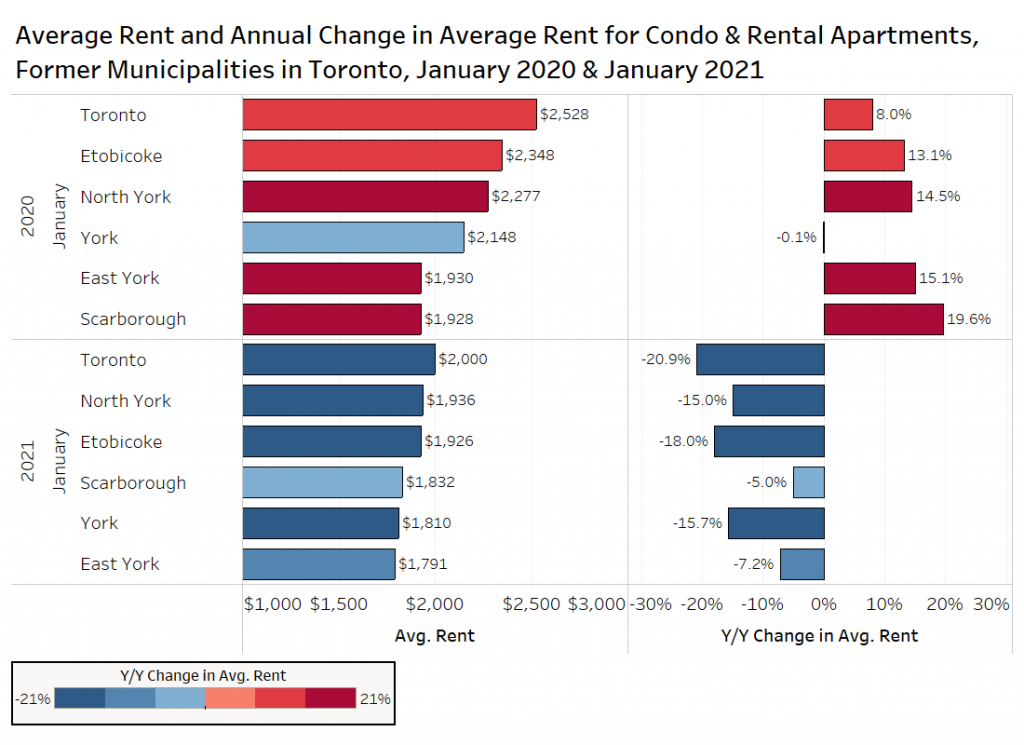 The next figure presents data on the average rent per square foot by rounded-unit size for condominium apartments and rental apartments in 2019, 2020 overall and January 2021. 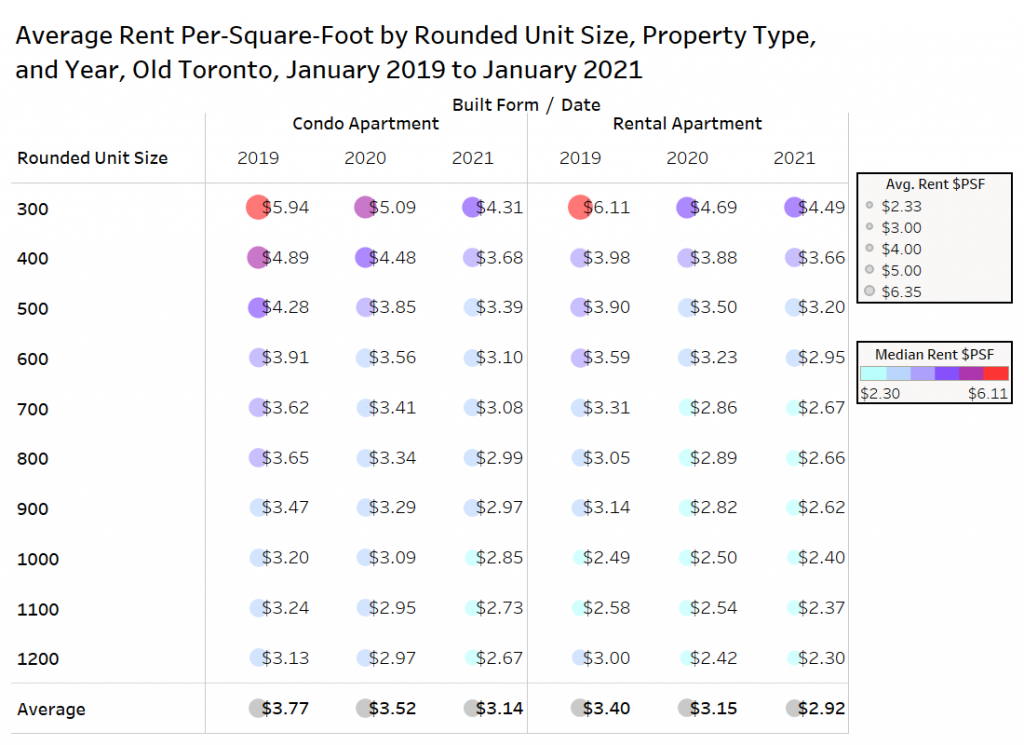 Purpose-built apartments have fared similarly, declining 14% since January 2019 down to $2.92 psf. Per-foot rents declined for every size range in the former City of Toronto for rental apartments in January 2021.

The chart below looks at the change in the average rent for small apartments from 400 square feet (sf) to 600 sf by municipality (condo and rental tenure) in January 2021. 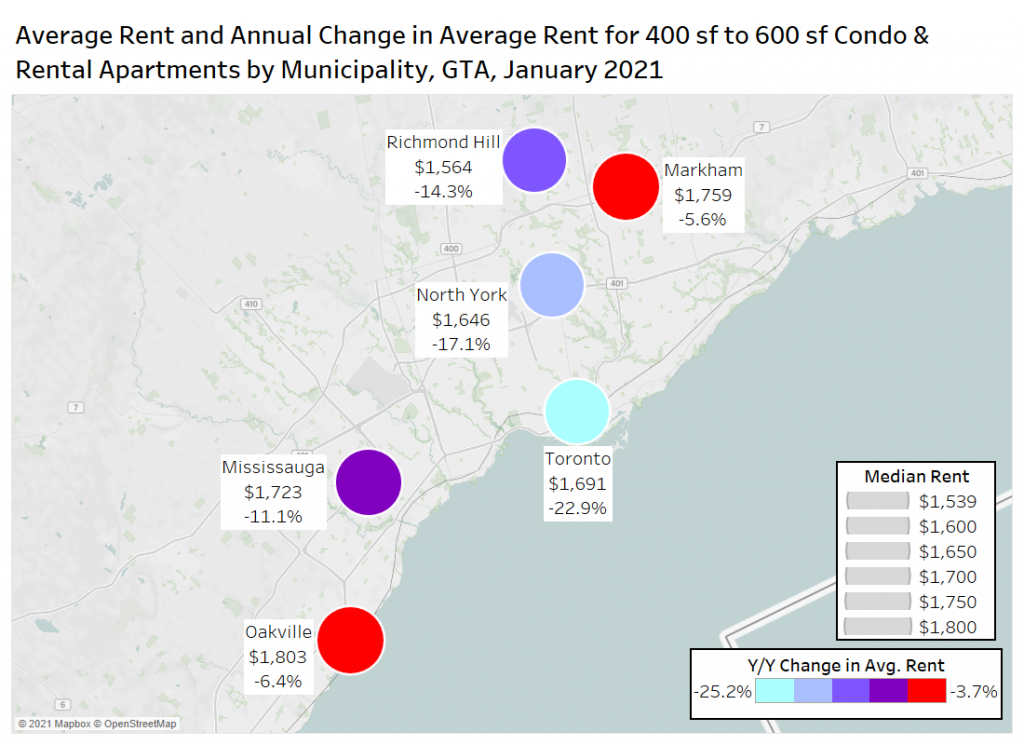 The lower rent for Toronto reflects the fact that there are many more micro-suites at the bottom of that size range. With many tenants now working from home, the smallest suites in the market in Toronto are less desirable, and have experienced significant rent declines.

The bar graph below presents data on several of the most active condominium apartments in terms of rental activity in the amalgamated City of Toronto in January 2021. The chart shows the average rent and annual change in average rent. 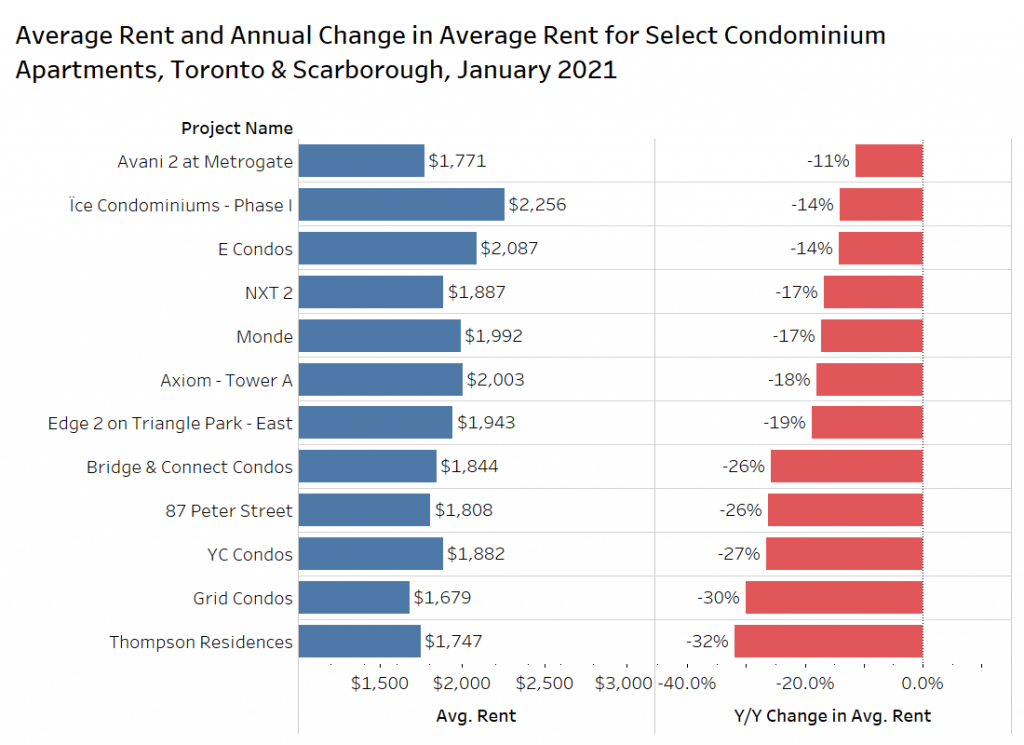 Taking a closer look at select condominiums in the GTA, all of these high-activity buildings experienced a decrease in average rent from the previous year. The largest decrease was experienced by Thompson Residences, which is in King West, declining 32% to $1,747 per month. The condominium with the smallest decrease was Avani 2 at Metrogate, a north Scarborough project completed by Tridel, down 11% to $1,771 per month.

In terms of average monthly rent, units in Grid Condos are the least expensive, averaging $1,679 per month after experiencing a 30% decrease in average rent from the previous year. Ice Condominiums – Phase 1 sports the highest monthly average rent per month at $2,256.

The average monthly rent for a unit in a purpose-built apartment building in January 2021 was $1,922 in these four former municipalities, down 8% from January 2020’s monthly average of $2,086 (see the table below). The overall rent per square foot has also decreased annually from $3.01 psf down to $2.82 psf, a 6% decrease. 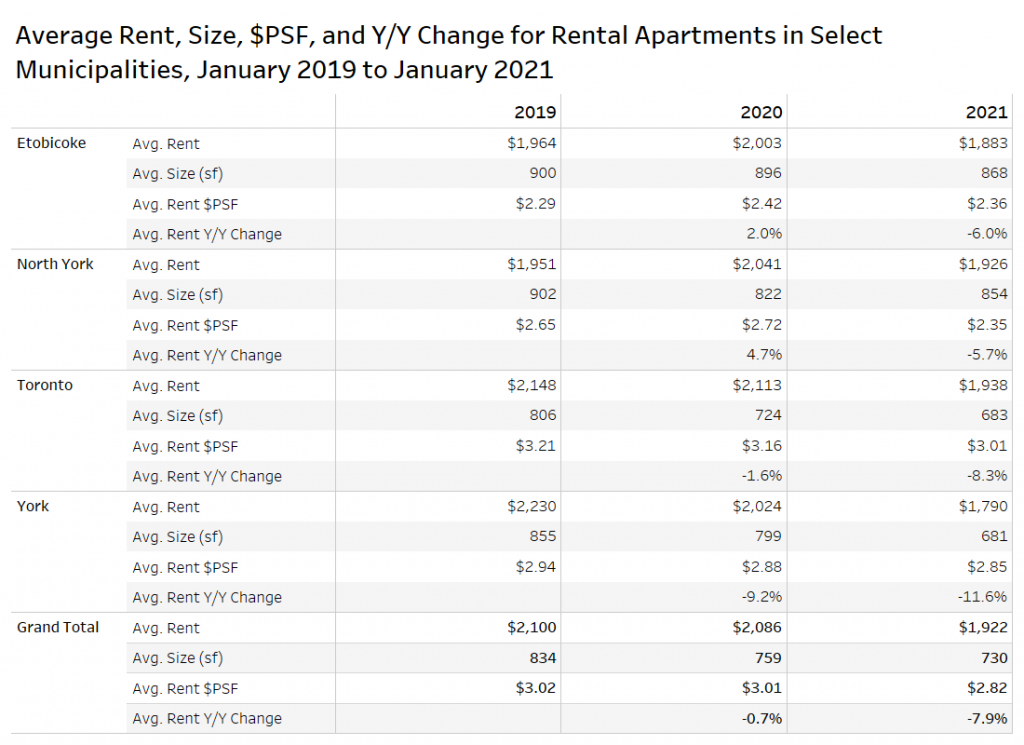 The rent in Etobicoke, North York, Toronto, and York have all declined annually. The average monthly rent in York experienced the largest annual decrease of 12%, while North York only decreased by less than 6%.

The average monthly rent for the sample of recently completed purpose-built apartments in Toronto was $2,653 between January 2020 and January 2021. The average size of a unit in one of these rental apartments was 722 sf while the average rent was $3.75 psf. 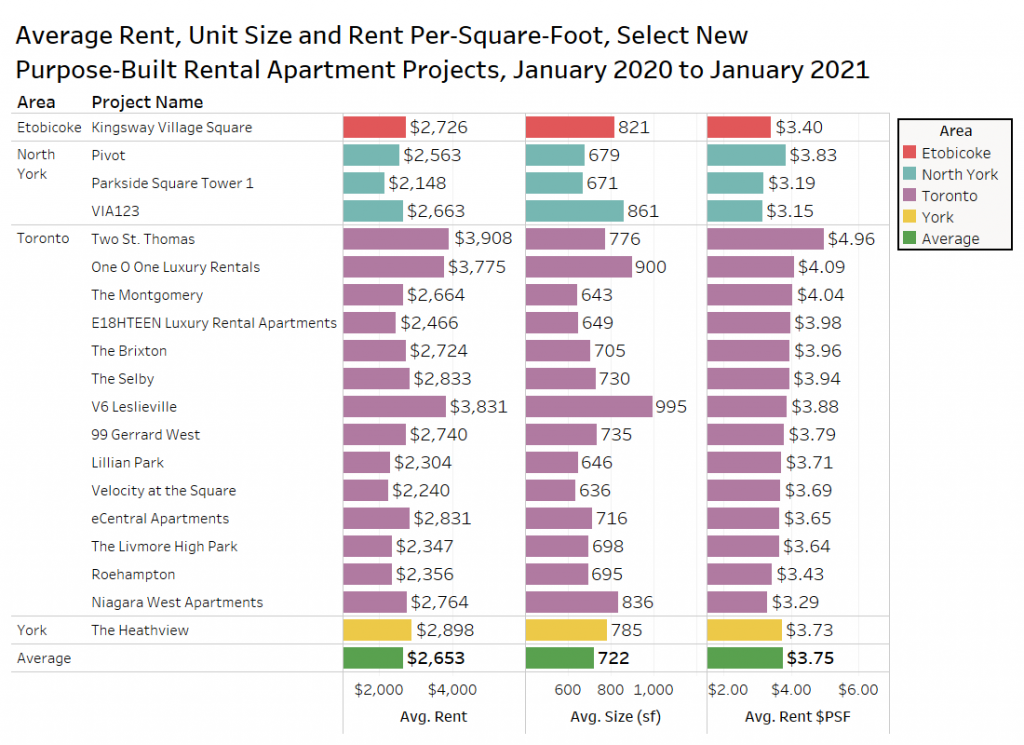 The rental market in the GTA continues to soften, with average rents for all property types declining for 14 consecutive months. The smallest suites on the market continue to see the biggest rent declines, as tenants seek out more space and take advantage of the 20% rent declines to secure suites with a den or extra bedroom.

There were fewer than 500 rental and condominium apartment completions in January per Canada Mortgage and Housing Corporation, but based on scheduled occupancy dates by developers, a lot of future supply will hit the market in 2021, which may further dampen rental rates in the face of much less demand.

The resale market for condominiums has begun to pick up in recent months, and perhaps that results in fewer units for rent as investors sell suites to end-users looking to take advantage of low interest rates. Clearly, some buyers are trying to time the bottom of the resale market. But it isn’t clear whether this will have a tremendous impact on the rental market, as many of those end-user buyers are tenants — so when they buy, rental demand declines.

It is likely that the rental market will continue to see declines for the next six months as the vaccine rollout has been slower than expected.