Until just a few years ago, the eastern portion of the LCBO lands on Toronto’s waterfront was occupied by surface parking and an unkempt wedge of grass and trees, formerly traversed by a rail spur leading to an LCBO warehouse. Now, this rectangular plot of land between Queens Quay East and Lake Shore Boulevard East is a busy construction site for the first three towers in Menkes Developments‘ Sugar Wharf complex, a 4.6 million ft² mixed-use community named in reference to the Redpath sugar refinery across Queens Quay.

An office tower at 100 Queens Quay East and two condo towers, Sugar Wharf Condos Phase 1, have been the first buildings to go up on the LCBO site. At its south end, the B+H Architects-designed office tower is quickly closing in on completion, topped out at 25 storeys. Since reaching its final height of 117.34 metres in Summer, 2020, the majority of the tower has been enclosed in a textured deep blue-tinted curtainwall glazing, with just a few panels still awaiting installation. The 675,000 ft², Class “AAA” LEED Platinum office building is set to open this year. Menkes’ webpage for the project notes that approximately 223,000 ft² of office space and 45,000 ft² of retail space remain available within. The LCBO’s new headquarters will serve as anchor office tenant, while The Toronto Region Board of Trade and its trade services arm, the World Trade Centre Toronto (WTC-T) are taking 90,000 ft². The opening of the LCBO’s new headquarters at 100 Queens Quay will mark a turning point not just for the new office tower, but for the wider complex, as it will free up the existing headquarters space for the redevelopment of the rest of the site to the west.

Meanwhile, north of the office tower, progress continues to be made as the complex’s first pair of condominium towers begin to rise separately above the podium levels. Designed by architects—Alliance, the 64- and 70-storey towers have been making steady progress, with advances most apparent on the condos’ southeast tower. Six levels now rise above the transfer section, with the extruded floorplates now rising at faster intervals, and this tower now prominent in skyline views from Sugar Beach to the southeast. 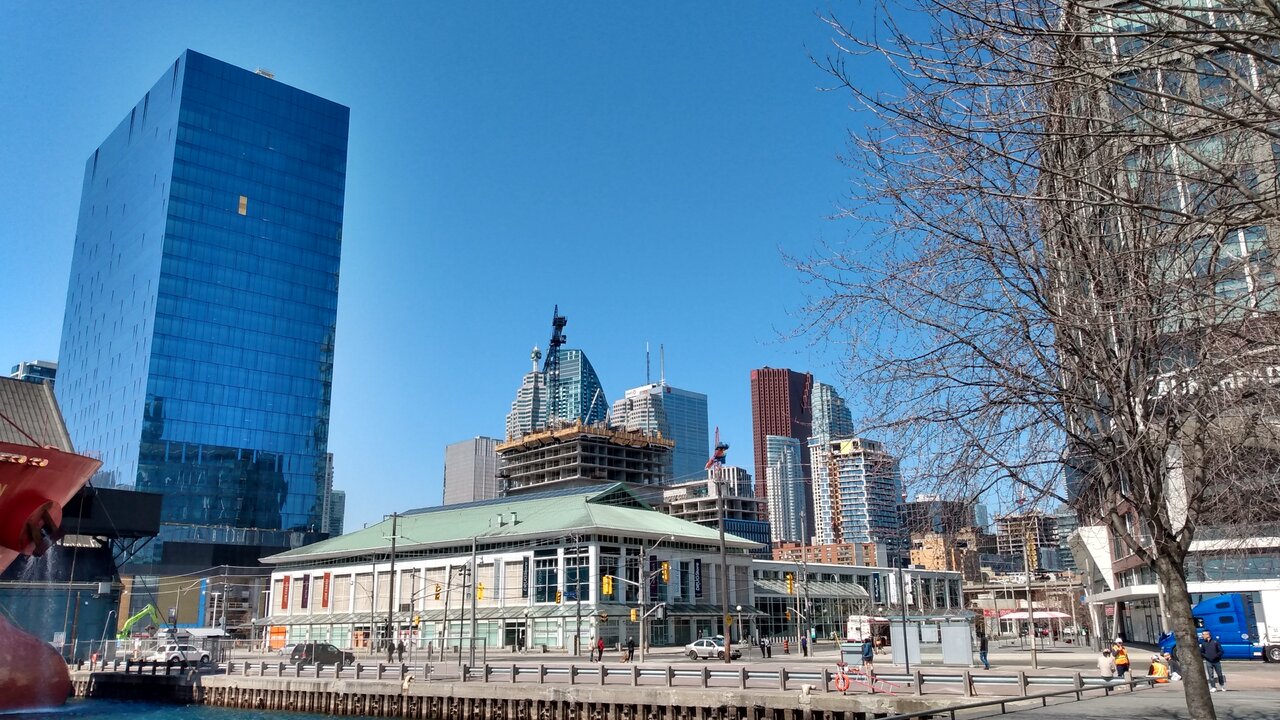 Cladding installation has been moving along at full speed, now enclosing much of the podium levels in a minimalist aesthetic. Of note are the east and west elevations of the north podium, which feature vertical piers of dark metal panel finishes, framing reflective glazing and intersected by horizontal black-banded slab edges. With the office tower complete and the first phase condos now clear of their podiums, the Sugar Wharf Condos Phase 1 towers are heading for heights of 218 and 230 metres, and set to take a prominent place on the city skyline. Much more height is on tap for the upcoming second phase, which will bring another three sky-scraping buildings to the west.