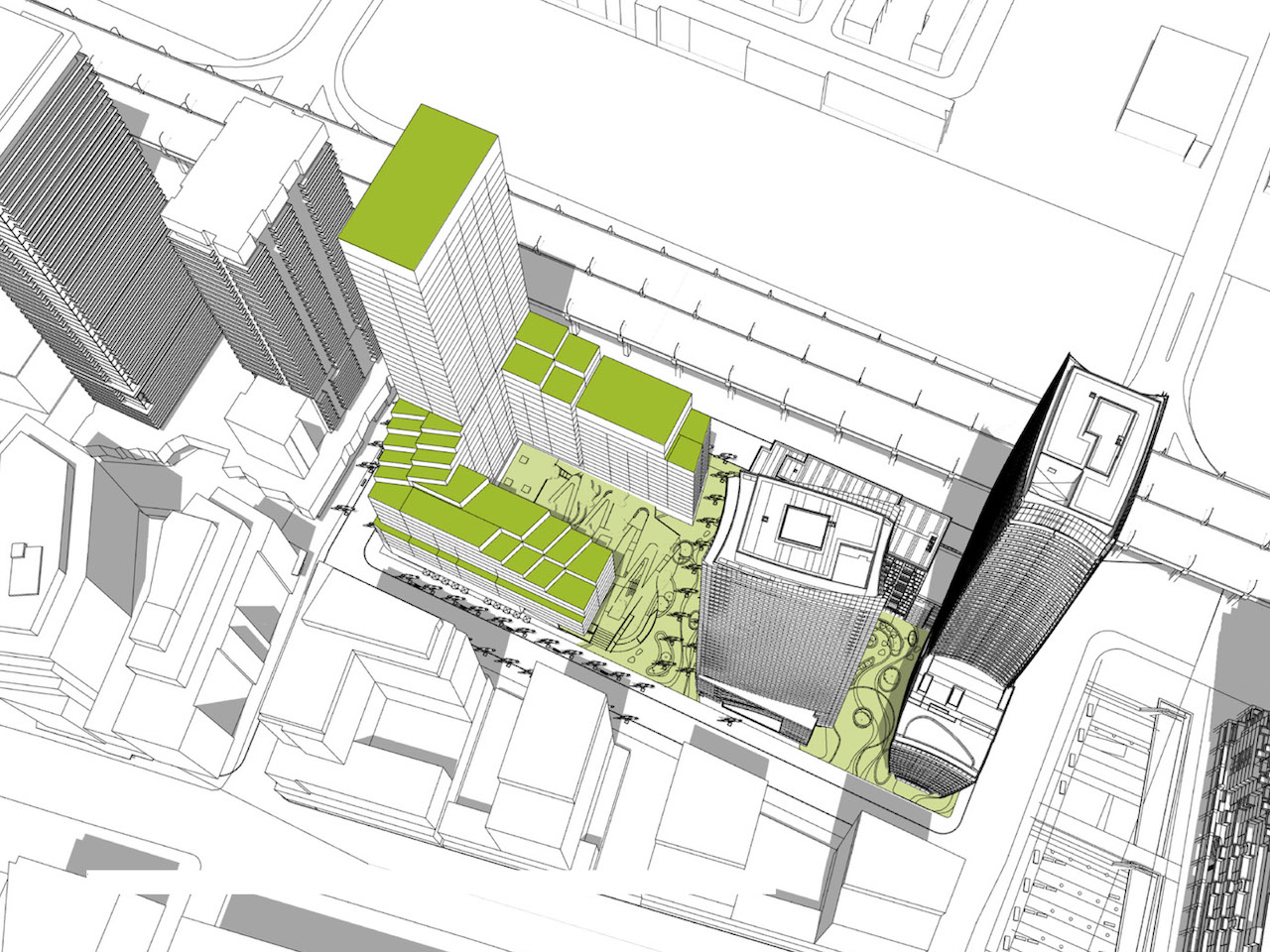 The property is situated on the south side of Lake Shore, opposite the Gardiner Expressway, and east of Richardson Street, where it occupies the west side of the two-phased redevelopment block. The 6,933 m² site is vacant, with Phase 1 currently starting construction. The immediate surroundings include a concentration of existing and proposed medium- to high-density mixed-use developments, including residential, parkland, office, and industrial, although the industrial uses are generally giving way to all the others as the area redevelops. 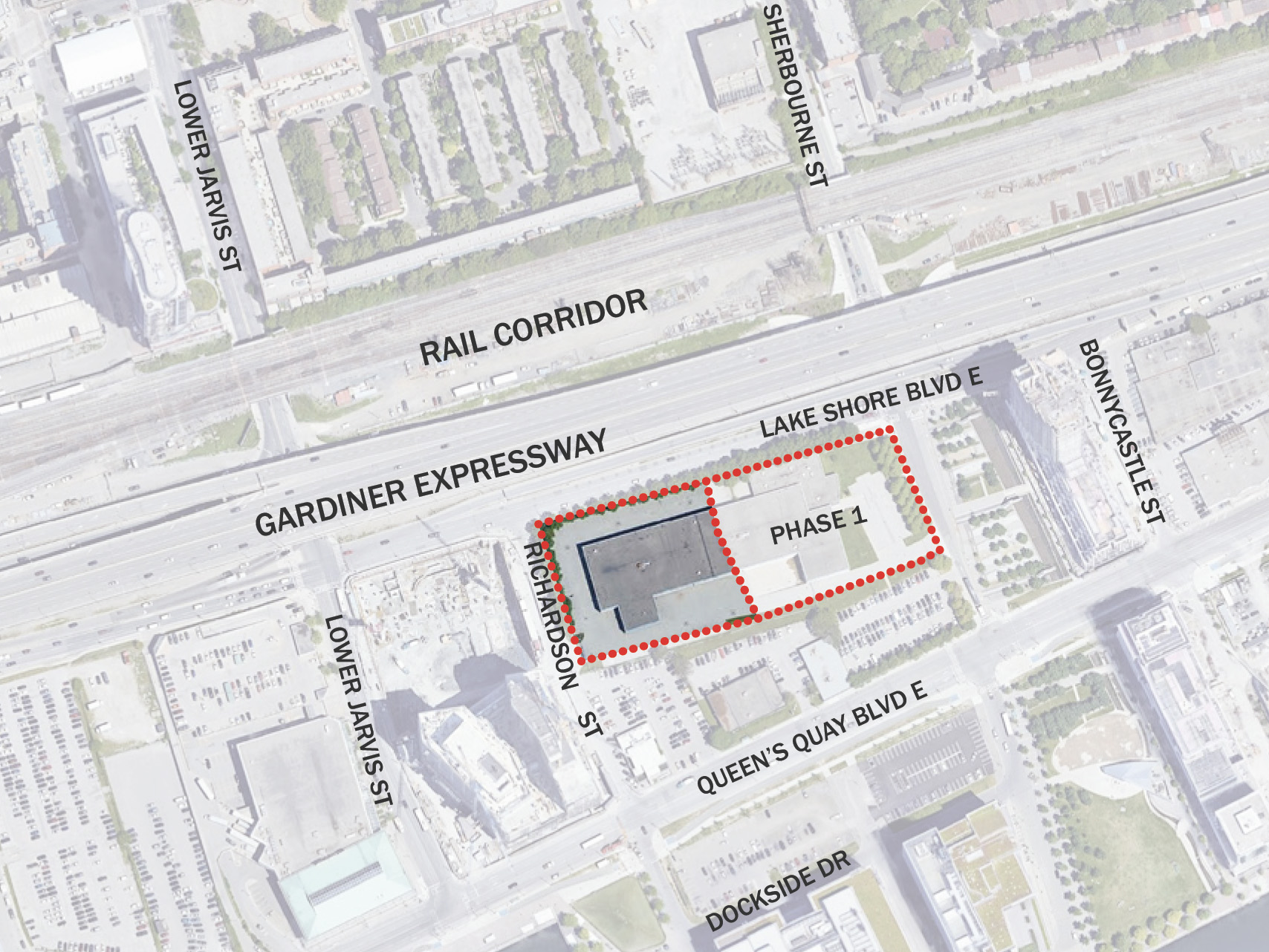 Prior to redevelopment, the Site was occupied by a single-storey warehouse building used by FedEx, image by Urban Strategies Inc.

The proposed development contemplates a terraced mid-rise (14-storey), mixed-use building and a 43-storey condo tower grounded by office, retail, and daycare uses in the podium. The total gross floor area is 64,845 m², leading to a site density of 9.4 FSI. The 141.6m high tower is positioned at the northwest corner of the site and does not cast shadows on existing parks or open spaces, according to the planning rationale, “while optimizing sunlight exposure on the proposed courtyard space and minimizing its physical and visual impacts on the public realm.”

Designed by Hariri Pontarini Architects, the proposal brings a total of 844 dwelling units, including 110 affordable housing units, in the following breakdown: 589 one-bedroom (70%), 146 two-bedroom (17%), and 109 three-bedroom (13%). It also introduces a 2,800 m² POPS (Privately Owned Publicly accessible Space) in the courtyard, immediately adjacent to and completing the pedestrian walkway being created in the Phase 1 development of the block.

A comprehensive review of the entire block resulted in a re-sculpting of the Phase 2 development to create an increased and improved publicly accessible open space at the centre of the block while respecting the overall East Bayfront urban design principles. The interior block courtyard comprises roughly 40% of the overall site area and provides an exterior ‘living room’ for residents and businesses on the block. 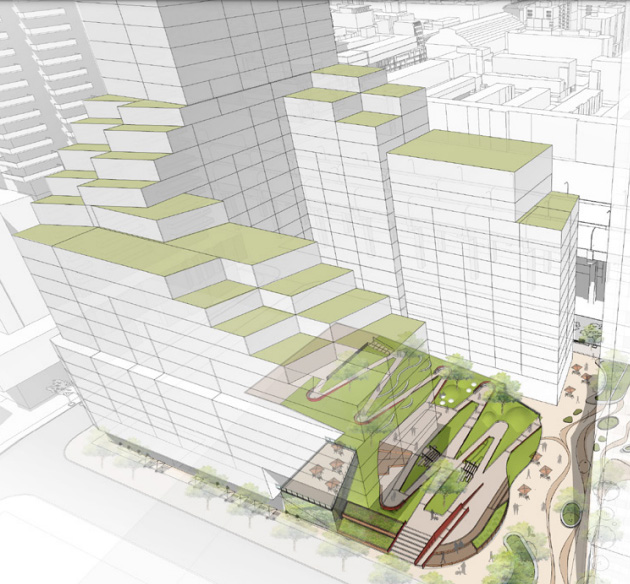