Surging demand for purpose-built rental units is being felt across Toronto and few areas are witnessing as much demand and growth in the rental market as Midtown Toronto, where modern developments are adding new housing stock to an area traditionally defined by 20th-century apartment towers. Now over one year into construction at the site of one such rental tower at 71 Redpath Avenue in Midtown Toronto, the project from The Benvenuto Group is moving along through its early stages a few blocks southeast of Eglinton subway station. The developer has submitted a proposal for the property next door, also designed by NEUF architects. The building at 8 Brownlow Avenue would further support the demand for housing in the area. 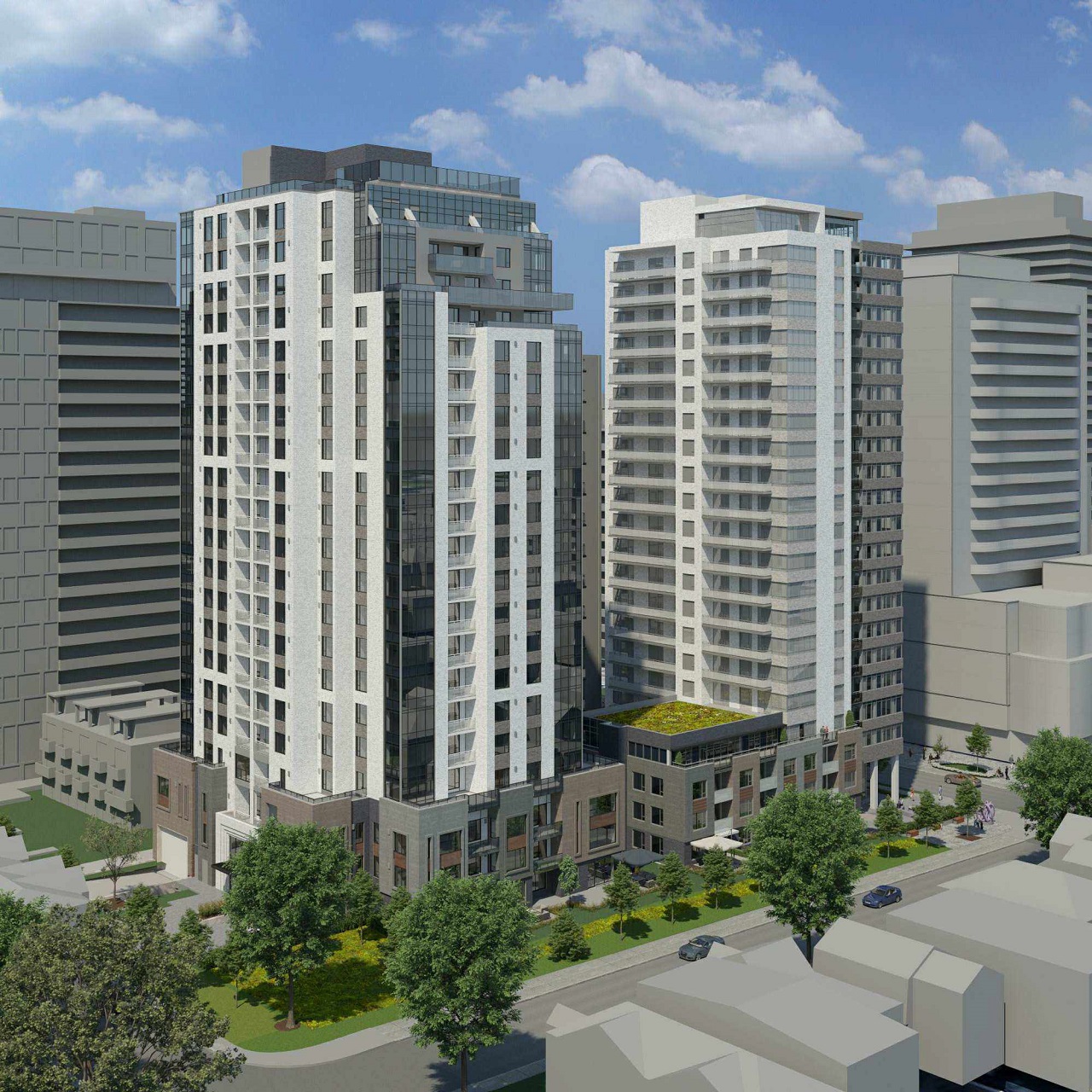 Looking northeast to 71 Redpath (L) and 8 Brownlow (R), image via submission to City of Toronto

The application seeks a Zoning By-law amendment to allow a 21-storey residential rental building with a total gross floor area of 13,160.7 square metres, entirely dedicated to residential uses. The massing includes a four-storey base volume along Soudan Avenue, stepping back at the third floor to respect the lower-density uses to the south. This massing replicates the approved conditions being built next door, rising 69.7 metres tall. 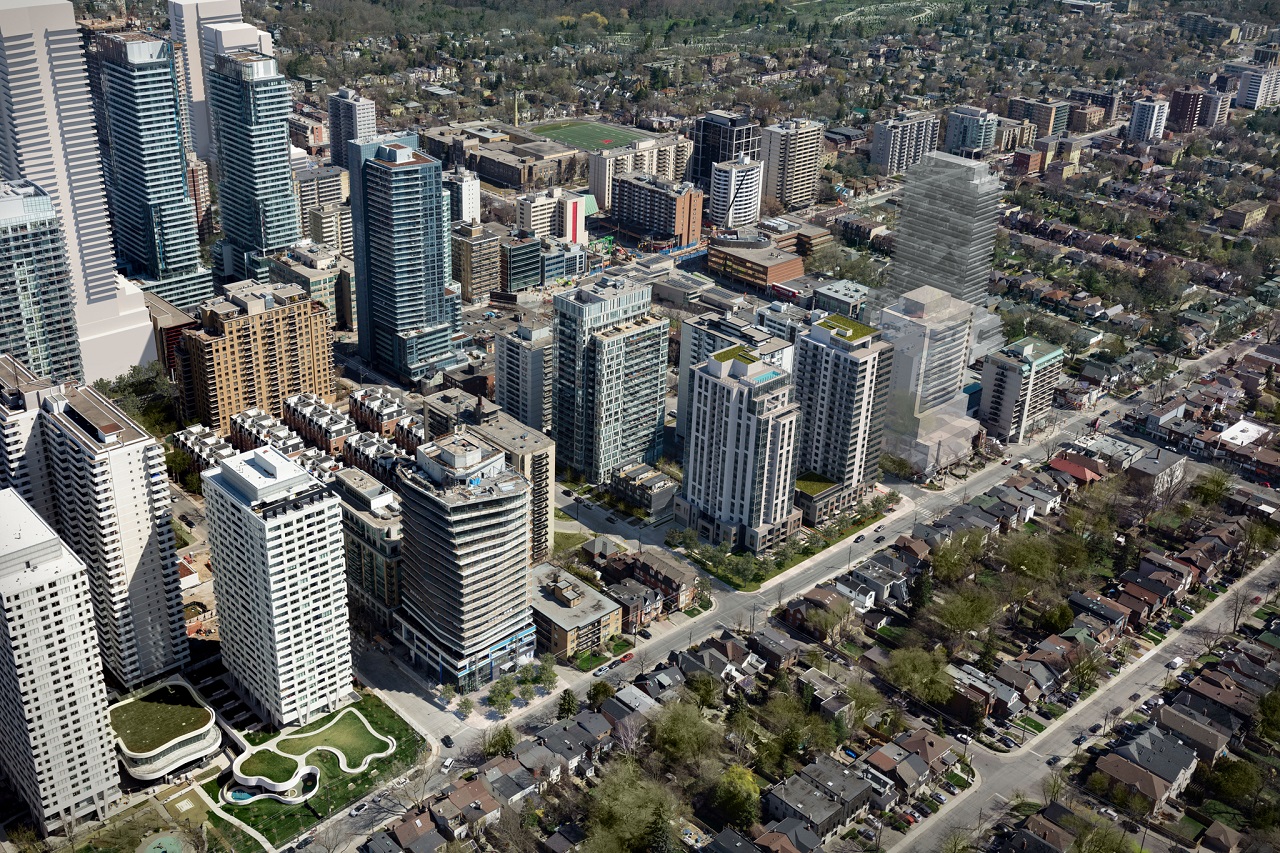 A total of 167 new rental units are proposed, in a mix of 17 studios (10.2%), 81 one-bedrooms (48.5%), 49 two-bedrooms (29.3%), and 20 three-bedrooms (12%). In addition to the new units, the proposal retains 185 existing units in 18 Browning Avenue, an older apartment building. With over 40% of the units offering two or more bedrooms, the building is primed to attract families while also addressing the demand for more compact units. Amenities for residents of the new tower are proposed both at the ground floor and atop the building, with the rooftop space to include a fitness centre with south-facing views overlooking the city skyline. 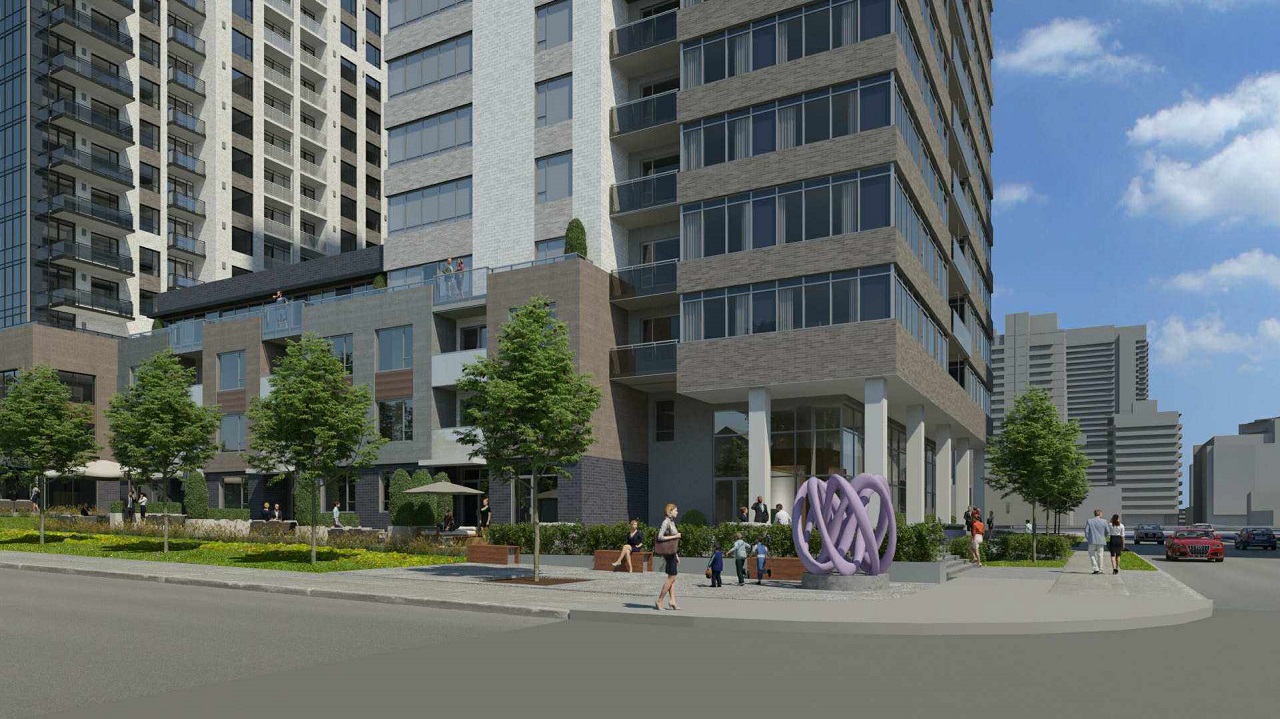 Looking north to base of 8 Brownlow, image via submission to City of Toronto

A three-level underground garage would connect with the garage currently under construction at 71 Redpath, with residents of the new building access their parking spaces via the existing 71 Redpath Avenue parking entrance. With this configuration using an existing parking entrance, no additional garage or loading areas would be built, minimizing disruption of the public realm around both towers. The garage extension would introduce another 102 parking spaces, with 97 long-term and 5 short-term spaces proposed. A total of 167 new bicycle parking spaces are also proposed, with 17 short-term bicycle parking spaces planned on the ground floor along Brownlow Avenue, and 159 long-term spaces to be provided within the P1 Level. 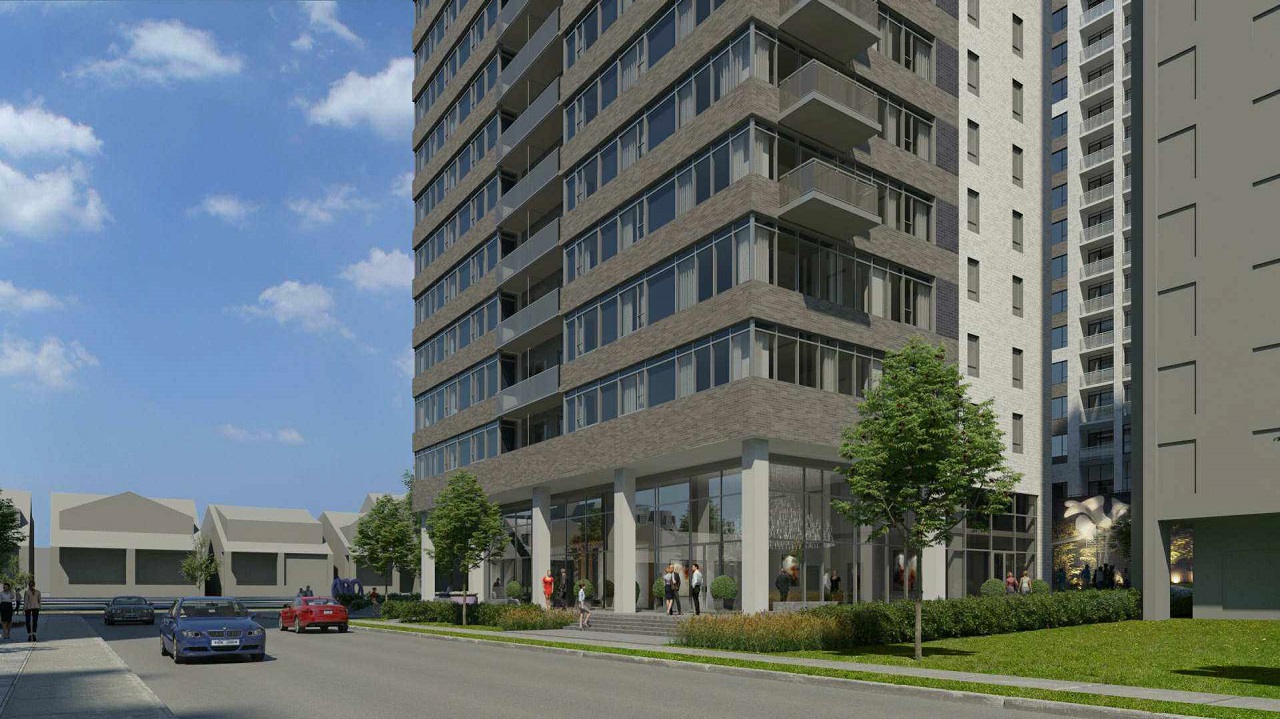 Looking southwest to base of 8 Brownlow, image via submission to City of Toronto

The project would be surrounded by a public realm plan designed by STUDIO tla, with space for a sculptural public art in a piazza at the corner of Soudan and Brownlow. Along the south side of the building, a five-metre-wide greenway established as part of the 71 Redpath plan would extend the full length of the block, creating a continuous open space from Brownlow Avenue to Redpath Avenue, while adding a green buffer between the complex’s higher density and the low-density homes across the street to the south. 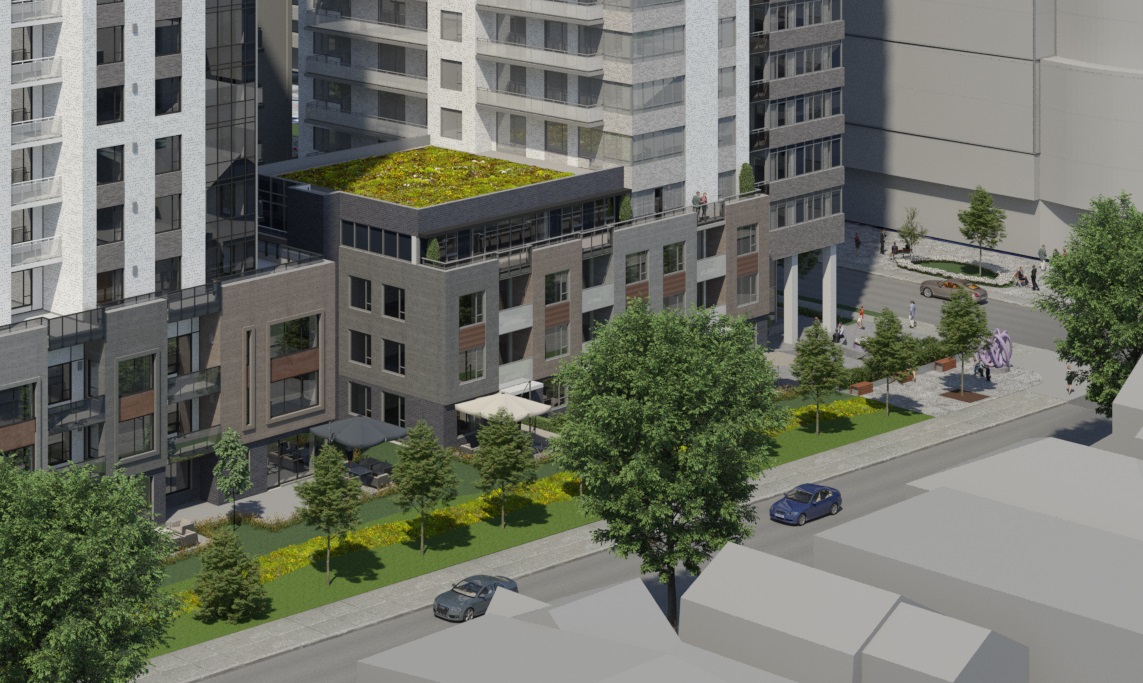 Greenway along Soudan Avenue, image courtesy of The Benvenuto Group

While the new phase enters the planning approvals process, the first phase is approaching a construction milestone as forming of its final underground level is completed, and the start of forming of the ground floor is imminent. 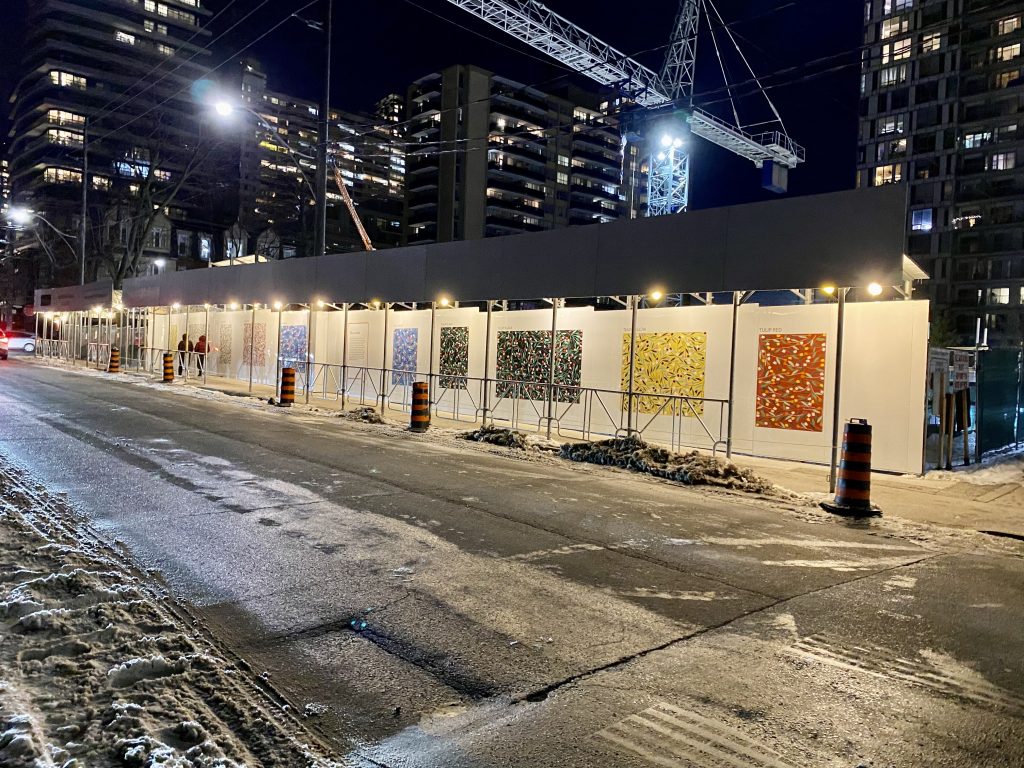 Construction at 71 Redpath, image via 71redpath.com