Another tower is beginning to rise in Toronto’s Entertainment District, and this one will be taller than any of its neighbours, where until now, the largely uniform heights of the buildings have created what’s referred to as a ‘tabletop’ skyline. Westbank Corp and Allied Properties REIT‘s new tower at 19 Duncan Street will rise 58 storeys and a height of 186.5 metres at the southeast corner of Duncan and Adelaide streets. While other towers in the area had been allowed by what was then called the Ontario Municipal Board to rise as high as 157 metres, the same as the Festival Tower at the TIFF Bell Lightbox, 19 Duncan was able to cite the approved heights of the future Mirvish+Gehry towers as new precedents, and to fit within their future shadows. By building first, 19 Duncan will become the area’s most prominent tower. 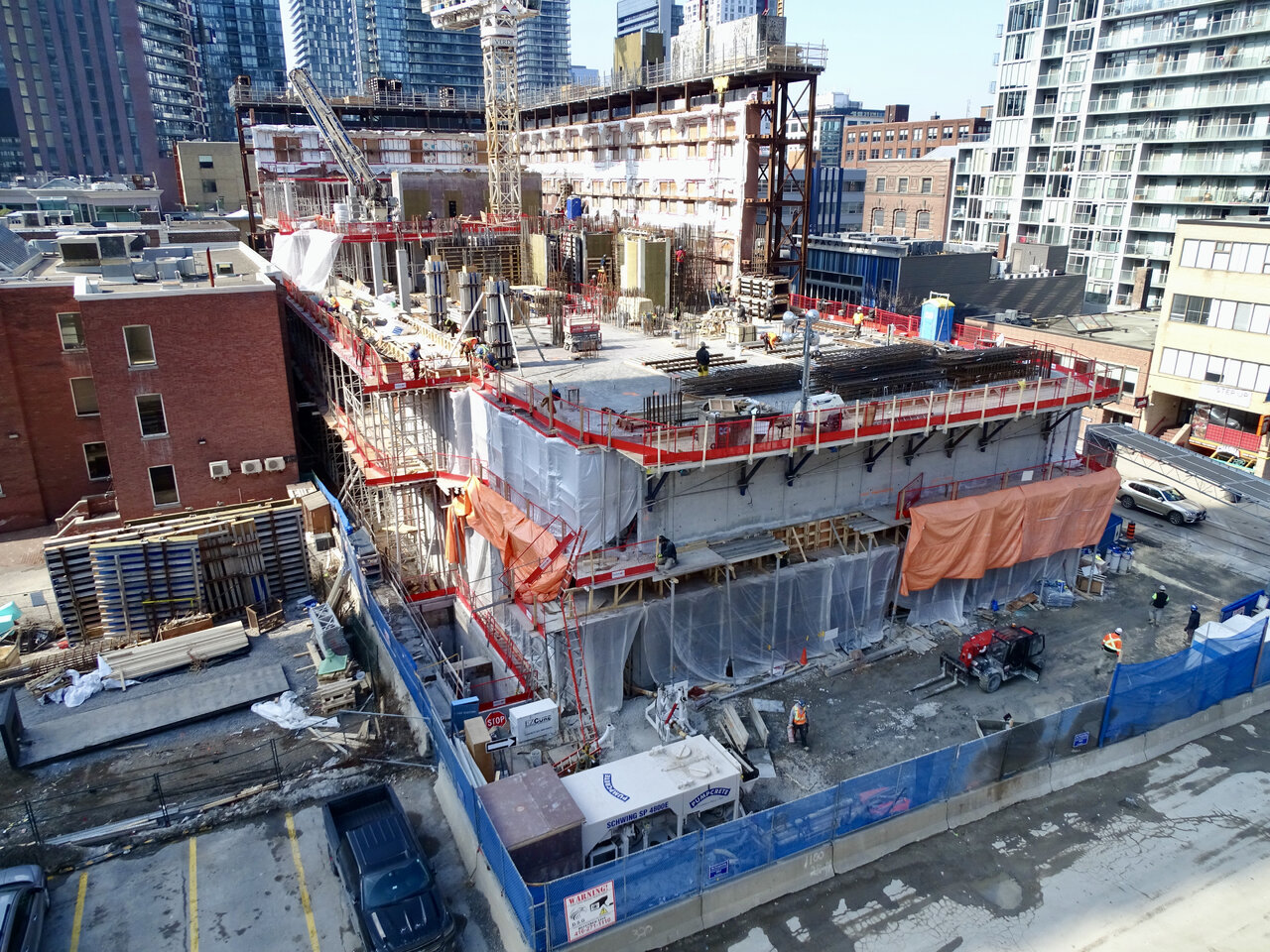 Work on the mixed-use development has been ongoing since mid-2018, and after about 2.5 years, the above-grade forming process is beginning to heat up. We last checked in on construction in October, 2020 when the first above-grade forming was unfolding behind and east of the preserved north and west walls of the 1908-built Southam Press Building. In the months since, work has been filling in the space behind the braced walls, with crews now forming the third floor, along with portions of the fourth floor at the west end of the site. 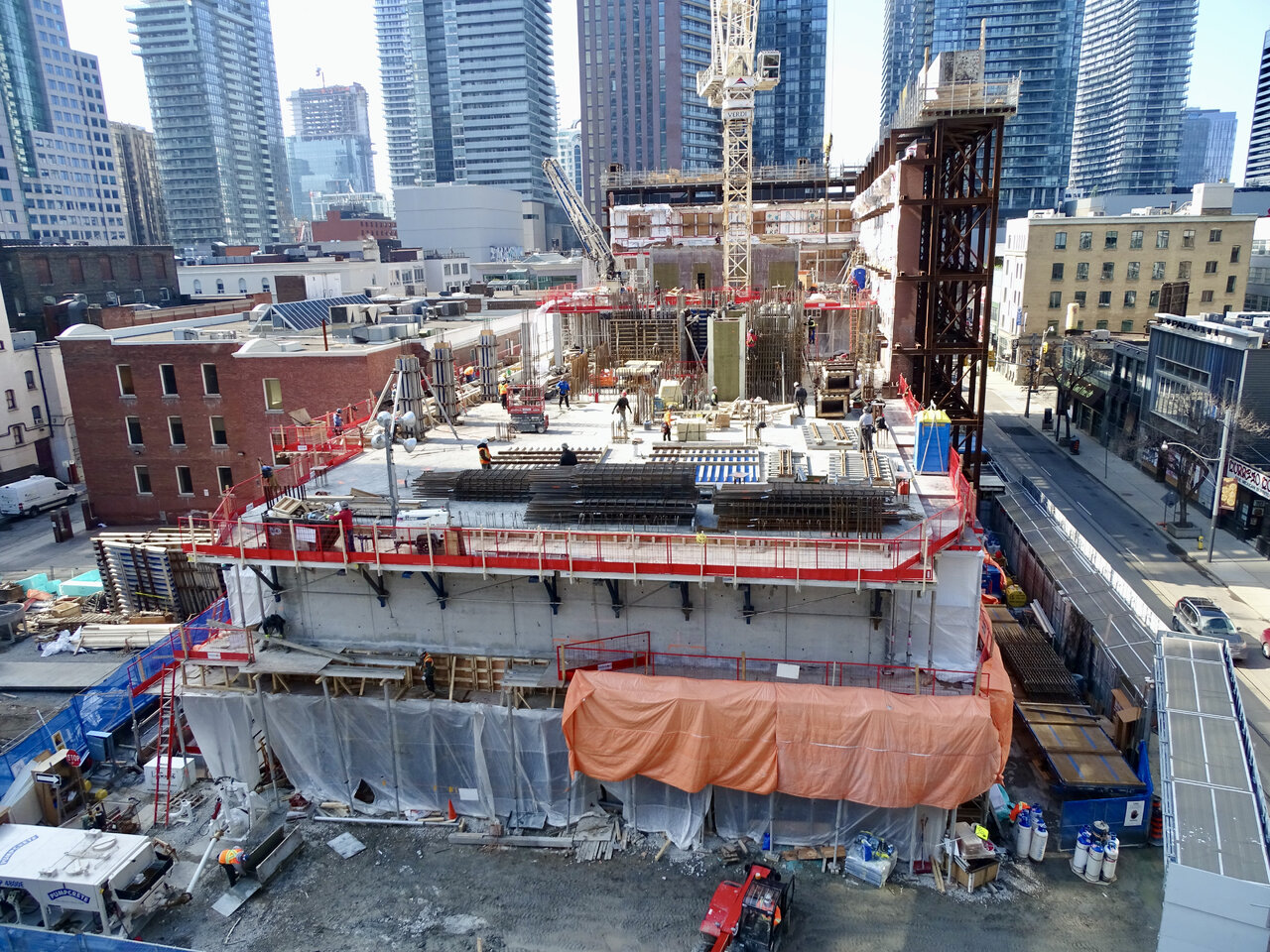 A zoomed-in view across the rising podium provides a closer look at a concrete pump being employed on fourth-floor columns and walls. 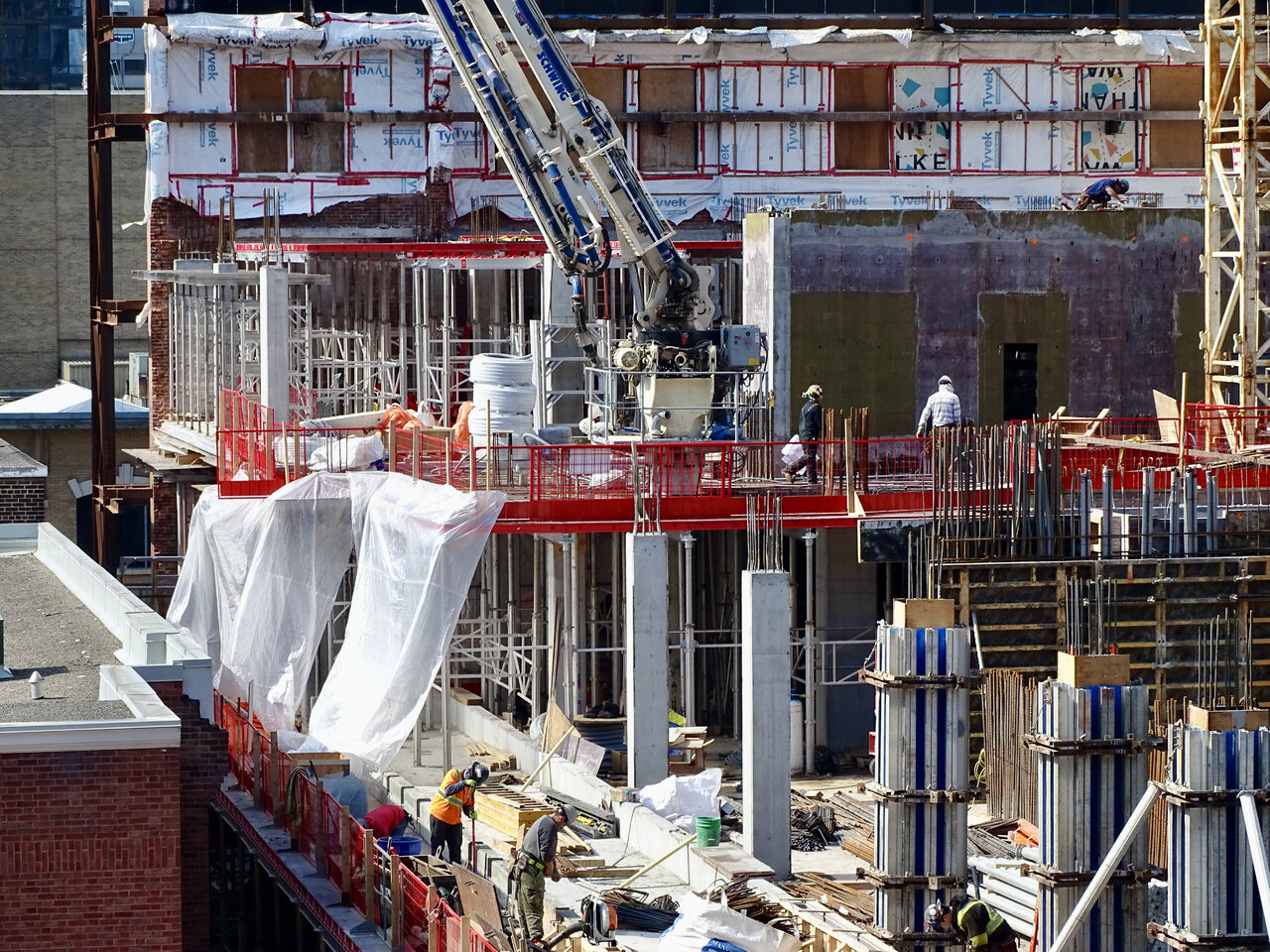 Above the heritage facades, the podium will step back and rise to a height of nine storeys before the smaller tower floorplate begins. Later in the construction process, the bracing will come down and the heritage walls will be restored as part of the facade integration process being overseen by heritage specialists ERA Architects. 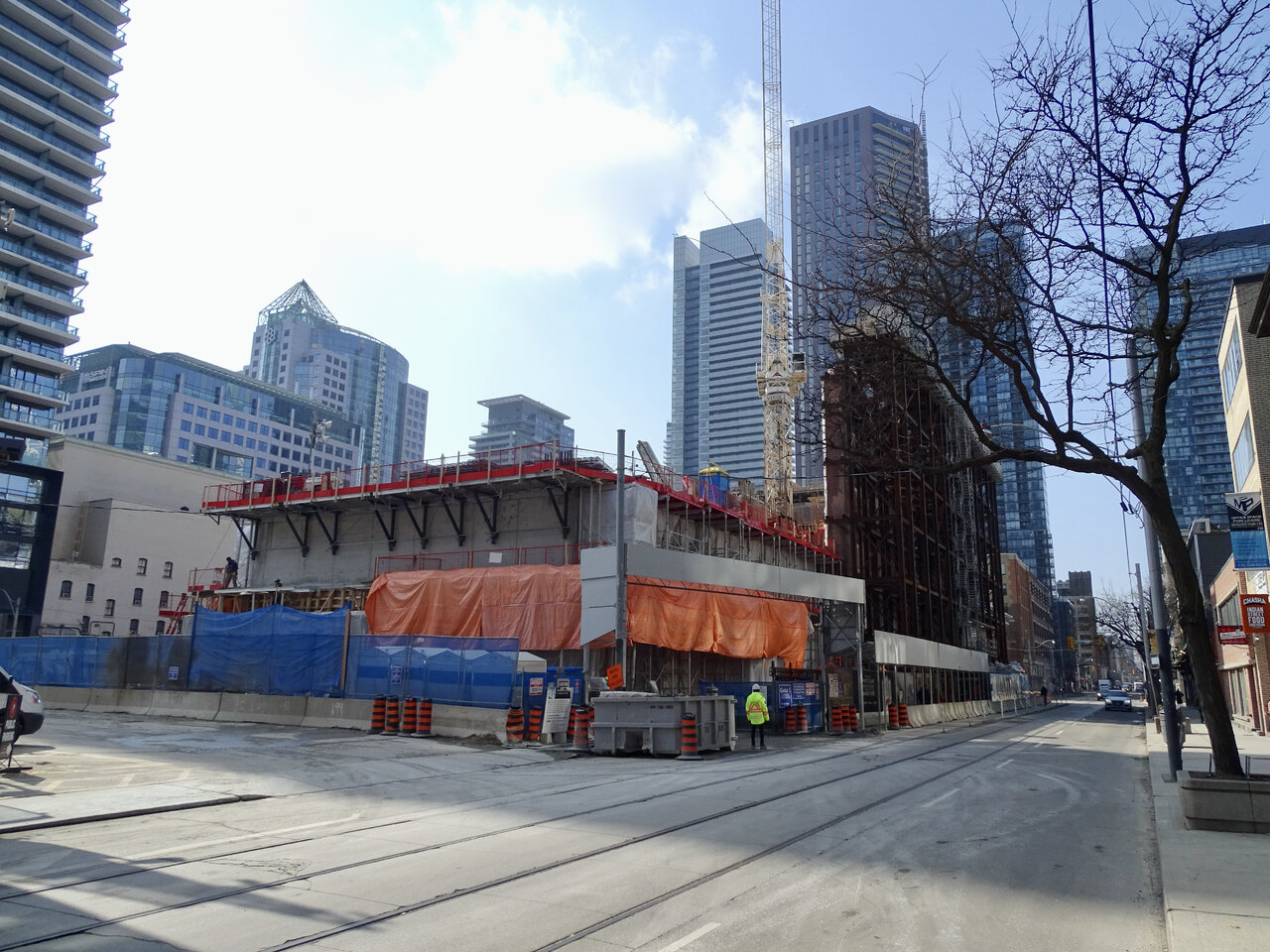 The podium levels will become the new Toronto home of news media giant Thomson Reuters, who signed on to lease the space for 12 years in a $100M USD deal. Above, 49 levels will be residential rental suites, while the 52nd through 55th levels will house 40 hotel suites. 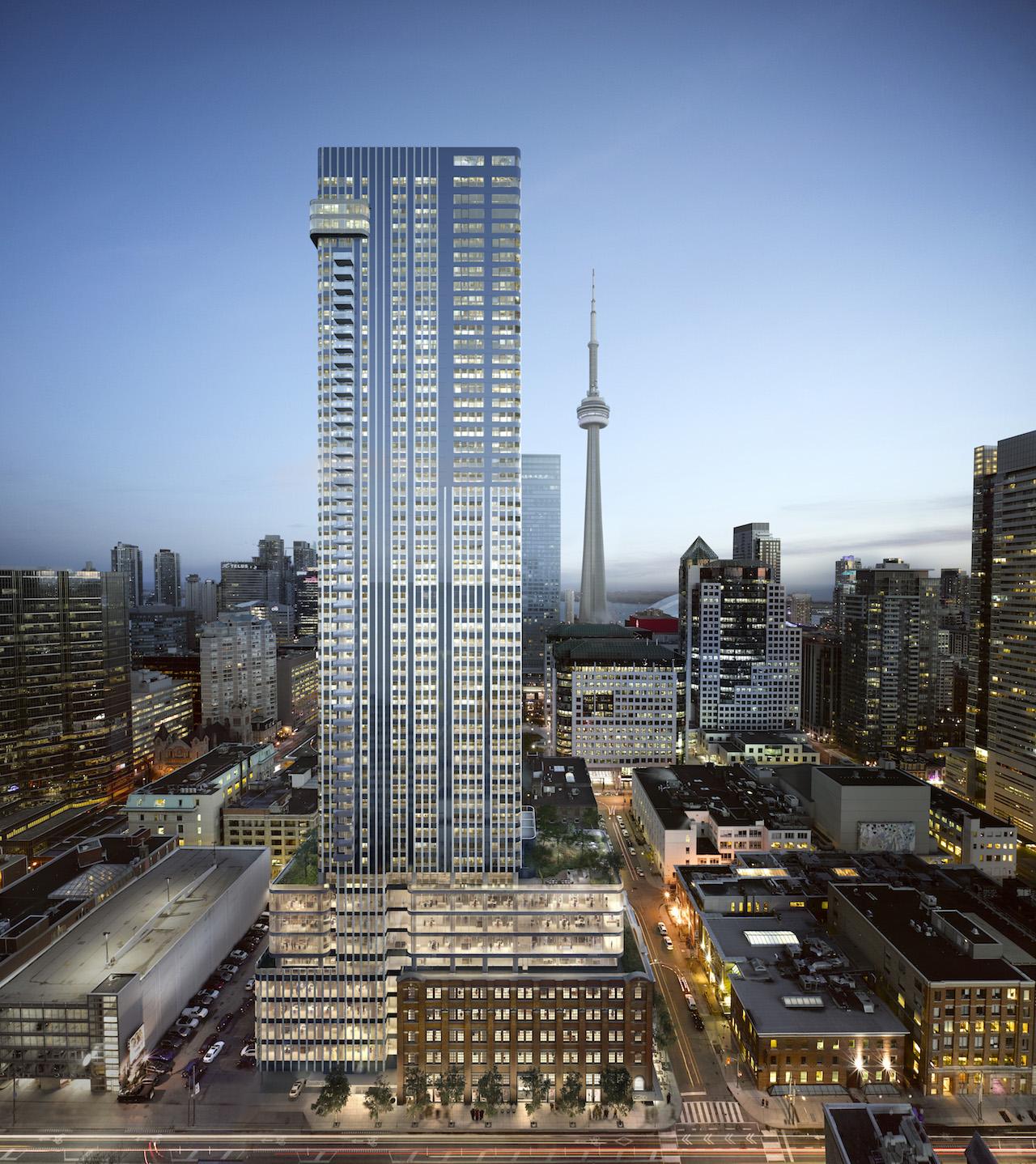 Looking south to 19 Duncan, image via submission to City of Toronto